Population – 40.7 million, Area – 2,780,400 sq km (1,073,518 sq mi), Currency – Peso (ARS; symbol AR$) = 100 centavos, Flight times – From London to Buenos Aires is 15 hours 50 minutes (via Madrid) and from New York is 10 hours 30 minutes, Cities – Buenos Aires (capital), Cordoba, Rosario, Mendoza, Mar del Plata, Time Zone – GMT -3 (GMT -2 from third Saturday in March to first Saturday in October), Weather – ranges from the great heat and extensive rains of the subtropical Chaco in the north, through to the pleasant climate of the central Pampas and the sub-Antarctic cold of the Patagonian Sea in the south. The main central area is temperate, but can be hot and humid during summer (December to February) and cool in winter, Languages – Spanish is the official language, English is widely spoken with some French and German, Religion – More than 90% Roman Catholic, 2% Protestant with small Muslim and Jewish communities, Electricity - 220 volts AC, 60Hz; plug fittings in older buildings are of the two-pin round type, but most new buildings use the v-shaped twin with earth ping, travelers must carry a world travel adaptor. 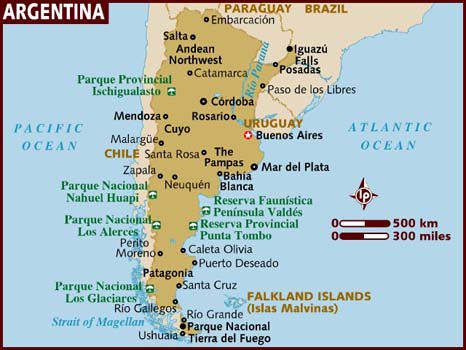 Comprising almost the entire southern half of South America, Argentina is the world's eighth largest country, covering an area of 2.8 million square km. Argentina possesses some of the world's tallest mountains, expansive deserts, and impressive waterfalls, with the diversity of the land ranging from wild, remote areas in southern Patagonia to the bustling metropolis of Buenos Aires in the north.

Argentina's wide variety of ecosystems is reflected on the great number of activities that can be enjoyed throughout the country. Each location offers a range of opportunities for visitors to enjoy in close contact with nature, its challenges and secrets, and surrounded by landscapes that make visitors feel like discoverers. Trekking, mountain-biking, mountaineering, white-water rafting, canoeing, hydro-speeding, rides in 4WD vehicles, hang-gliding, paragliding, cart-sailing, and windsurfing, are some of the most popular recreational and sport activities that can be practiced, and which are constantly renewed and adapted to suit visitors' preferences.

Argentina is a plain, rising from the Atlantic to the Chilean border and the towering Andes peaks. Aconcagua (22,834 ft, 6,960 m) is the highest peak in the world outside Asia. Argentina is also bordered by Bolivia and Paraguay on the north, and by Uruguay and Brazil on the east. The northern area is the swampy and partly wooded Gran Chaco, bordering Bolivia and Paraguay. South of that are the rolling, fertile Pampas, which are rich in agriculture and sheep- and cattle-grazing and support most of the population. Further south is Patagonia, a region of cool, arid steppes with some wooded and fertile sections.

This area surrounding the Andes began as a colony of Peru, but today only a few miners and herders occupy this unforgiving region of volcanic peaks and salt lakes. Very little rain falls in Cuyo, though to the east are found the fertile river valleys and subtropical lowlands of the Gran Chaco.

Mesopotamia, a broad, flat plain between the Parana and Uraguay Rivers in northern Argentina, is wet, swampy and extremely hot during the summer. The northern province of Misiones, a more mountainous region nearly enclosed by Brazil and Paraguay, is densely forested and contains a section of the majestic Iguazu Falls.

This parched area in the west is part of the enormous Gran Chaco, a region that Argentina shares with Bolivia, Paraguay, and BrGauchoazil. The Chaco contains both grassland and thorny forest.

These fertile plains are Argentina's bread- basket. They consist of the Humid Pampas along the seaboard and the Dry Pampas in the west and south. The region includes Buenos Aires, as well as the world- class beaches of its surrounding area.

South of the Rio Colorado, experiences a desert climate, although temperatures range from mild to subzero and terrain varies from bucolic river valleys to the gigantic, ice-capped southern Andes. Its cool grazing grounds support enormous flocks of sheep, and numerous fruit and vegetable farms can be found in the valleys. Patagonia also holds vast reserves of oil and coal.

The Land of Fire is actually an archipelago including the Isla Grande de Tierra del Fuego (which Argentina shares with neighbouring Chile) and numerous smaller islands. Northern Isla Grande is similar in terrain to Patagonia's plains, while the mountainous area in the south is filled with forests and glaciers. Its climate is usually mild year-round, although storms are frequent.